On January 17th, 2015, a unique and moving concert took place on the OT Stage, a.k.a. the theater at Oakland Tech High School. The 2014-2015 school year marked the hundred-year anniversary of this landmark institution, and the school found many ways to celebrate.

Kristen Caven, who was the president of the PTSA at the time, dressed in historical costume throughout the year, and as KRS-10 led a Zumba™ class to engage students in ten decades of dance from Scott Joplin to Skrillex. With PTSA treasurer Stephen Brown, she planned a concert both to thank volunteers and set intentions for the next hundred years.

She engaged pianist Daniel Finnamore to showcase the school’s historic Steinway piano, which had been restored as part of the theater’s multi-million dollar update. The concert, entitled 100 Years/88 Keys, featured music that was written by romantic and expressionist composers around the time Tech was built. Speakers included principal Staci Ross and school board member Jodi London sharing thoughts on the past and future of education, which is always in a state of flux responding to the times. The highlight of the performance was “Invocation.” Franz Liszt’s  thundering opener to his soul-searching piano cycle, “Harmonies poétiques et religieuses.” This cycle was inspired by a series of deeply sentimental Romantic meditations on divinity written a century before, by a French nobleman named Alphonse LaMartine who helped shape the foundations of Democracy. To continue the creative, multi-century conversation, Kristen Caven wrote rapturous lyrics to Liszt’s piece.

The seemingly impossible task of setting words to this complex piece of classical music—full of questions and answers, soaring litanies and cascading anxieties—was an exhilarating challenge for the creative Mrs. Caven. She took the opportunity to further develop the “Rivers and Pillars” speech she had given at the school’s Centennial Book Launch to a library full of notable school district alumni which included five former superintendents. Her image of the rivers of souls that have passed through the majestic columns of the school were contrasted with a the chilling vision of the front steps submerged in a rising sea. The poem calls for the problems caused by the past century to be solved in the next one by through the education of young minds, surging with divine inspiration.

The emotional notes of the evening highlighted a poignant yurning point for many.  For Finnamore, it was a circling back to the beginning of his concert career; the monstrous Invocation had been the first piece he played at his first public concert at age nineteen, after graduating from Skyline High. The students who worked on or performed at the event—ballerina Deon Oddone, Caven’s son Donald, and their close group of friends in the Tech Techies—were months from graduation and new beginnings. Honored guests from the class of 1961, who had spearheaded the piano’s restoration, had much upon which to reflect. And everyone who had known him was mourning the sudden loss of Stephen Brown, a dedicated school supporter, who had been Caven’s partner in planning the concert. (There is now a bench along Lake Merritt dedicated to Stephen, and a college scholarship in his name at Oakland Tech.) 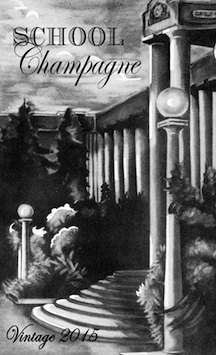 After the presentation, guests were invited on stage to admire the piano and savor homemade cupcakes served on a tower of “pillars” built by students, and drink “faux champagne” labeled with art designed by Caven. The concert raised nearly a thousand dollars for school programs.
Since the 2015 concert, Caven and Finnamore have continued to develop their collaboration. Caven annotated the poem for literary presentation, and Finnamore began working with drummer Steve Moriarty on new interpretations and iterations of Lizst’s little-known masterpiece.
Caven trained through the 350 Bay Area Speakers Bureau and uses Invocation for presentations that focus on the religious and emotional aspects of the coming climate catastrophe.
[youtube https://youtu.be/MdvLwYRxxPc]